The Bronson Gate Entrance at Paramount Studios is one of the most photographed features. 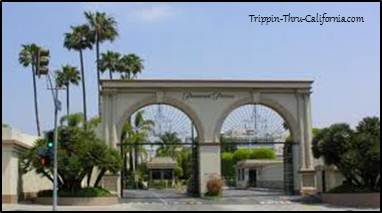 This gate has been featured in many movies and dates back to the early days of the studio. It is aligned so that the famous “Hollywood sign” can be seen directly through it. They are located at 5555 Melrose Avenue in Hollywood, California.

To find these historic archways just type in your starting address.

Have you considered a Sightseeing Pass to save money? Click here to compare passes. CityPASS or Go Card?﻿

This is a two hour tour It runs Monday through Friday, at 10am, 11am, 1pm and 2pm. Closed on weekends and holidays. Due to the spontaneous nature of production, tours will vary. You’ll ride around in an 8-10 person golf cart from set to set, although there is a bit of walking on some of the sets, and you’ll see where some of the most celebrated motion pictures and TV shows were made. Be on the lookout for celebrities!﻿

For Studio Memorabilia, check out the
HOLLYWOOD MEGA STORE : Your Studio Superstore !

They also have the Chicago Section of the backlot, which resembles common architectural styles found in the Midwest. At several stories tall, the facades in each and every section create an authentic urban atmosphere perfect for capturing the excitement and drama that New York and other major metropolitan areas provide (even when they’re in Hollywood).

Click on each Hotel to find the best deal, compare prices, and read what other travelers have to say about these. I have not personally stayed at any of these hotels so please read the reviews before booking your trip.

Go Back to All Studio Tours from Paramount Studios

Note: This information was accurate when I published it, but can change without notice. Please be sure to confirm all rates and details directly by calling 323-956-1777 before planning your trip.

Full Disclosure Trippin’ Thru California does make a small commission if you purchase products through my links. After all, this is one of the ways I am able to provide you all the free content on this website. More importantly, being a partner in these programs allows me to offer you special sales and discounts. So often, you will receive a better price than going directly to their website, and you will never pay more. Please know the information provided on this page is unbiased and accurate to the best of my ability.